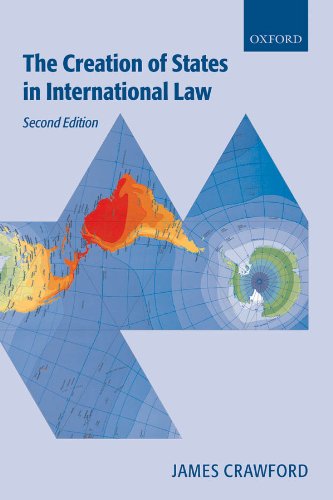 Statehood in the early 21st century remains as much a central problem as it was in 1979 when the first edition of The Creation of States in International Law was published. As Rhodesia, Namibia, the South African Homelands and Taiwan then were subjects of acute concern, today governments, international organizations, and other institutions are seized of such matters as the membership of Cyprus in the European Union, application of the Geneva Conventions to
Afghanistan, a final settlement for Kosovo, and, still, relations between China and Taiwan. All of these, and many other disputed situations, are inseparable from the nature of statehood and its application in practice.

The remarkable increase in the number of States in the 20th century did not abate in the twenty five years following publication of James Crawford's landmark study, which was awarded the American Society of International Law Prize for Creative Scholarship in 1981. The independence of many small territories comprising the 'residue' of the European colonial empires alone accounts for a major increase in States since 1979; while the disintegration of Yugoslavia and the USSR in the early 1990s
further augmented the ranks. With these developments, the practice of States and international organizations has developed by substantial measure in respect of self-determination, secession, succession, recognition, de-colonization, and several other fields.

Addressing such questions as the unification of Germany, the status of Israel and Palestine, and the continuing pressure from non-State groups to attain statehood, even, in cases like Chechnya or Tibet, against the presumptive rights of existing States, James Crawford discusses the relation between statehood and recognition; the criteria for statehood, especially in view of evolving standards of democracy and human rights; and the application of such criteria in international organizations and
between states. Also discussed are the mechanisms by which states have been created, including devolution and secession, international disposition by major powers or international organizations and the institutions established for Mandated, Trust, and Non-Self-Governing Territories. Combining a
general argument as to the normative significance of statehood with analysis of numerous specific cases, this fully revised and expanded second edition gives a comprehensive account of the developments which have led to the birth of so many new states.