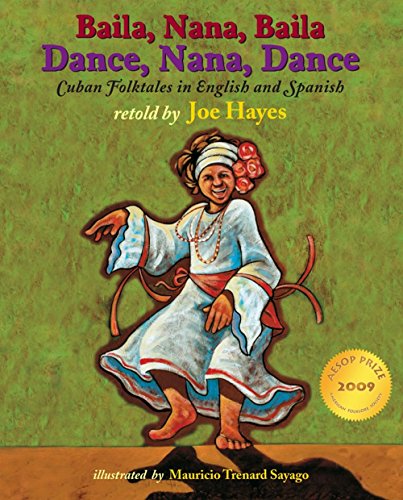 "With a style that captures the rhythmic pulse of the Cuban way of life, the vibrant storytelling in this collection of tales by Joe Hayes will delight Spanish-speaking and English-speaking children alike. The accurate translation builds familiarity in reading and expressing ideas in a second language. The colorful illustrations reflect the warmth of Cuban folk art. We hope that this anthology will inspire young readers to gain great awareness of Cuban cultural sensibilities.”—The American Folklore Society

If you travel to Cuba, the people will greet you with a smile. Right away they’ll want you to come to their home and eat a meal. In the meal, you’ll find a mixture of foods and flavors from Spain and Africa—and from many Caribbean cultures as well. In Cuban folktales, you will taste the same delicious mixture of flavors."

Folklorist and storyteller Joe Hayes first visited Cuba in 2001. He fell in love with the island and its people and began to look for opportunities to meet and listen to Cuban storytellers and to share the stories he knew from the American Southwest. He has returned every year, establishing a rich cultural exchange between US and Cuban storytellers. Out of that collaboration came this savory collection of Cuban folktales, which Joe frames with an introduction and an all-important Note to Storytellers.

Joe Hayes is one of America’s premier storytellers. His bilingual Spanish-English tellings have earned him a distinctive place among America’s storytellers. Joe has published over twenty books. He lives in Santa Fe, New Mexico, and travels extensively throughout Texas, New Mexico, Arizona, and California.

Mauricio Trenard Sayago was born in Santiago de Cuba in 1963. He was raised in a home that was closely linked with art and was surrounded by the artistic debates sustained by the various artists and art history professors in his family. This environment strongly influenced him. Mauricio came to the United States in 2000, and now lives in Brooklyn.