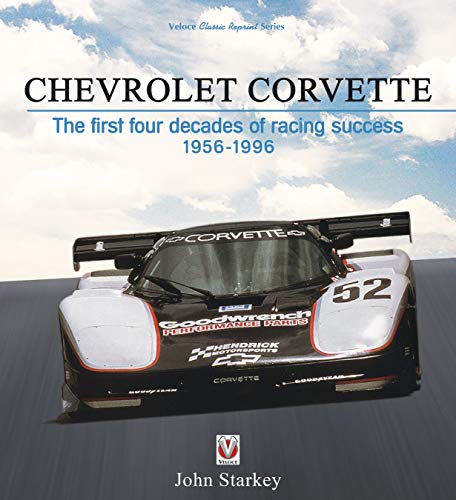 Reseña del editor This revised reprint of a classic title covers the history and development of the racing Corvettes, from the car's beginnings in the 1950s with just 250 horsepower, through the Corvette GTP of the 1980s, with over 1000 horsepower, and on to 1996, when 4th generation cars give way to the 5th generation. Included are many interviews with the drivers who raced these exciting, weighty and always fast cars, including John Greenwood, Dick Gulstrand, Jerry Grant and `Fast' Phil Curring, amongst others. The book is illustrated with many quality photographs, supplied by General Motors and well-known motoring photographers; it also contains detailed specifications of the production cars, and road test reports. Biografía del autor John Starkey began life in Birmingham, England. After school, with dreams of rock stardom looming, he joined several bands, before becoming Jasper Carrott's manager. Starting with a Jaguar XK120, bought in 1966 for GBP120, he discovered sports cars, and after a 1958 Ferrari 250 GT Berlinetta, life was never the same again. The racing bug bit hard when he acquired a Porsche RSR. Then came: `a beast' of a 935, a Lola T70 Mk 3b coupe, and a March 84G. These cars he raced across Europe and America. In 1997, John moved to America, where he began writing, naturally, about racing cars ... After twenty books, John is now writing a novel about the world of dealing in old cars. He also investigates the histories of old racing cars for clients, and together with Su, his wife, likes walking Boomer, his dog. He still has an XK120.